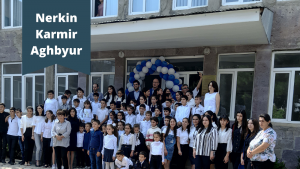 Nerkin Karmir Aghbyur –With the completion of the reconstruction at the secondary school in the large border village of Nerkin Karmir Aghbyur, in Armenia’s Tavush Region, students are experiencing a vibrant newly energized approach to their education. The nearly $250,000 capital project was funded by Jean-Marie and Lori Atamian and their friends, Michael and Patricia Starzer, through The Paros Foundation’s Prosperity on the Border initiative and was completed in phases over four years. The campus consists of three large two-story buildings and has been reconfigured to accommodate more than 150 students in this growing village. 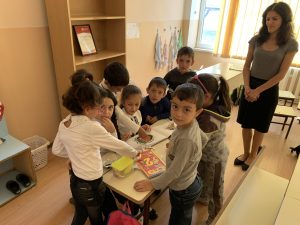 Originally an isolated border school in disrepair, the school now serves as a hub of education for the region and attracts many visitors and innovative programming.

One of the most modern rural educational facilities in Armenia, the Nerkin Karmir Aghbyur school now boasts bright classrooms and hallways, fully equipped science labs, a robotics room, an auditorium, a dance studio, library, exercise rooms and a state of the art kitchen and cafeteria. The gym has also been renovated and the children are provided with gym clothes at the start of every academic year, which proudly displays the school’s logo.

This ambitious project is part of a comprehensive initiative undertaken by the Atamian Family to rebuild the infrastructure of this important village and previously saw the complete reconstruction of the kindergarten, medical clinic, emergency services building and water supply system. The Atamians are continuing to fund the reconstruction of homes for large families and various agricultural projects to allow residents to improve their living conditions. The economic potential of this village recently prompted the government to build a modern, asphalted three-mile road connecting this previously isolated village to the main road and to finance an auxiliary water pipeline.

“The annual and long term financial support provided by the Atamians is helping transform Nerkin Karmir Aghbyur into a thriving and growing community,” said Peter Abajian, Executive Director of The Paros Foundation. “This village is serving as a model for our Prosperity on the Border Initiative and is inspiring other diasporan families to support the development of several other border villages, including: Paravakar, Chinari, Baghanis, Varagavan and Artsvabert.”

WANT TO SERVE IN THE HOMELAND? APPLICATIONS FOR SERVICE ARMENIA 2020 AVAILABLE NOW