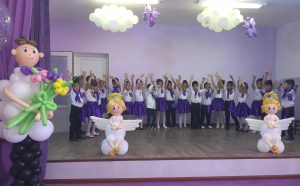 Children at the Kindergarten in Nor Keghi performing at the opening celebration!

On July 6, 2018 The Paros Foundation’s staff and SERVICE Armenia 2018 participants joined the mayor, staff, parents and children of Nor Keghi in Kotayk province to celebrate the opening of the newly renovated kindergarten auditorium.

The Arakelyan Kindergarten facilitates the early education of more than 85 children.  The renovation of the multipurpose room, stage, ready room, adjacent hallway and stairwell was made possible by the generosity of the Detroit based Nor Keghi Association which sponsored the project.   The Paros Foundation had previously renovated two bathrooms at the kindergarten as part of its 100 for 100 Projects for Prosperity initiative in 2015 with the support of the Nigoghosianfamily.

“We were able to help Nor Keghi’skindergarten solve another important issue with the help of the Nor Keghi Association and its fundraising efforts,” said Peter Abajian, Executive Director of The Paros Foundation. “The village population is increasing, and the kindergarten principal has requested we help them expand by renovating additional rooms.” 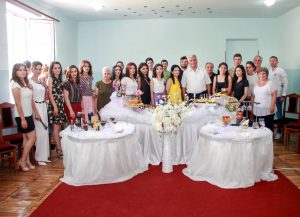 Nor Keghi Mayor, Kindergarten staff, parents, and friends gathered with The Paros Foundation’s staff and SERVICE Armenia 2018 group to celebrate the successful completion of the remodel.

For the auditorium project, The Paros Foundation team installed new doors and windows, resurfaced the existing wood parquet floors, installed laminate flooring in the ready room and stage area, added new electrical and lighting throughout and repaired and painted the walls and ceiling.  The team also worked with the mayor to bring proper heating to the facility.  Following the renovation, 80 high quality stackable chairs were delivered to outfit the multipurpose room. A plaque will be installed in the auditorium acknowledging sponsorship of the project by the descendants of Keghi through the Nor Keghi Association in association with The Paros Foundation.

“It is so heartwarming to see pictures of the renovated multipurpose room of the Arakelyan Kindergarten,” said Nor Keghi Association President, Richard Norsigian. “When my son, Shant and I entered the room in person last September, we were 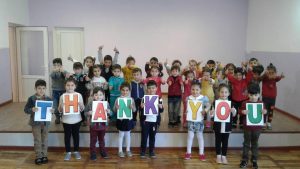 Children at the Kindergarten in Nor Keghi express their appreciation during a performance in the newly renovated multipurpose room.

devastated – it looked like a tornado had hit it!  It was unusable.  We were deeply saddened to think our little Armenian kindergartners did not have an indoor facility for activities.  The pictures of the now completely renovated multipurpose room brought tears of joy to my eyes.  To our generous Keghetzis and friends who made the renovation possible, I say vartzkernees gadarand God willing, we have only just begun!”