Thirty Years ago Today, a Story of Mount Ararat, Uzbeks and April 24. 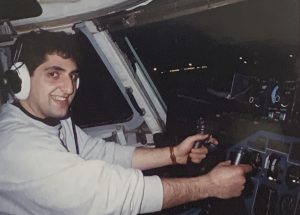 When the Soviet Pilots took a break, I took over (LOL.)

Today, I am celebrating a rare anniversary from my Los Angeles home.  Thirty years ago this day my size 13 shoes touched Armenian soil for the first time.  Given the global pandemic facing the world, it is a strange time for a “celebration,” but it is a great time for some reflection. Over this last 30 years, I have made 69 trips to Armenia and hold tickets (that are now delayed and rescheduled) for number 70.  A bunch of stuff has changed for sure during this time–Soviet Armenia became The Republic of Armenia and has now undergone a revolution to become the “New Armenia.”

If you know me, you know I have a lot to say about everything, but the story of my first few days in Armenia had some notable highlights I want to share.

I was traveling to Armenia as an envoy aboard a Soviet cargo plane (an Antonov 124 for you aviation buffs, with a gross flight weight of 1 million pounds and a Soviet crew of 7), whose cargo was earmarked as earthquake relief supplies bound for Gyumri.  My job was to oversee the process and ensure the supplies made it to Gyumri without loss or graft. 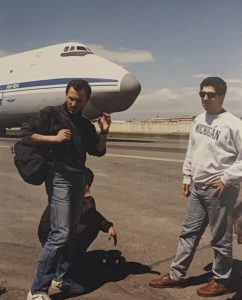 Here I am on the ground at the airport waiting to begin the unloading process.

I arrived into Zvartnots Airport just outside of Yerevan, Armenia (then still part of the crumbling Soviet Union) at approximately 5:30 a.m. local time on April 22, 1990.  We locked up the airplane and agreed to return the next morning to begin the unloading process.  I asked for a taxi to take me to Hotel Armenia.  A kind officer, who notified me that there were no taxis available, took me to the hotel with his own car.  On the way, as he was zooming along in his old Lada, I asked him where Mt. Ararat was because I wanted to absolutely see our majestic mountain as soon possible.  The officer essentially slammed on his brakes and swerved to the right and looked over his shoulder and pointed to the right and said proudly “there it is!” (in Armenian of course.) It was one of those picture perfect views of Mt. Ararat that remained burned in my memory until today.

I arrived to Hotel Armenia at about 6 a.m. and understood that check-in does not open until 9 a.m.  I settled down in the area in front of the check-in desk and waited with two other guys that kept trying to talk with me in Russian.  Note: At this point in my life, I was working with some very basic Western Armenian that I tried to learn as an undergrad at U of Michigan (Go Blue!).  We really couldn’t communicate, but they pegged me as a Westerner-and I pegged them as hard-core Soviet.  About an hour into our none existent conversation, one of them shows me his Soviet passport. I notice that they were from Uzbekistan.  Hmmm, if memory serves, Uzbek is a Turkic language; so, in my best Turkish I asked them if they understand me.  Much to all of our delights, we had a mutual language after all.  Turns out that these guys were sent from Uzbekistan to Armenia to oversee the construction of a housing project in the earthquake zone as part of the massive Soviet response to the 1988 Spitak Earthquake.  Who the hell would have ever thought that my first meaningful conversation in Armenia, would be in Turkish, with two Soviet Uzbeks!

April 23 was spent at the airport with stories to fill 10 more posts at some later date. 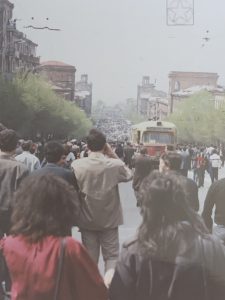 The streets were filled with people in the procession to the Armenian Genocide Memorial. 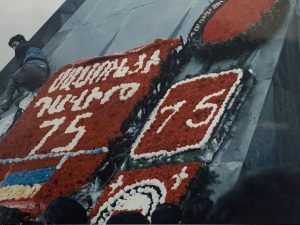 Just outside of the Armenian Genocide Monument on the 75th. 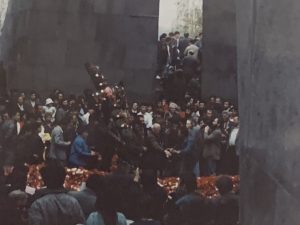 Near the eternal flame inside the Armenian Genocide Monument.

The next day was April 24.  It just so happened that it was the 75th commemoration of the Armenian Genocide.  It was a very powerful day.  I connected with one of my friends who was studying in Armenia, and we made the pilgrimage to the Armenian Genocide Monument at Tsitsernakaberd.  The local buzz was that on that day, one million people visited the monument.  Seeing the massive parade of the elderly, freedom fighters, families and children, I could believe that number. When we arrived to pay our respects, the flowers around the eternal flame were already five feet high by 12 noon.  I never thought that I would have the honor of visiting Tsitsernakabert on exactly April 24 two other occasions in 2007 with my wife and daughters, and on April 24, 2015 to commemorate the centennial of the Armenian Genocide. 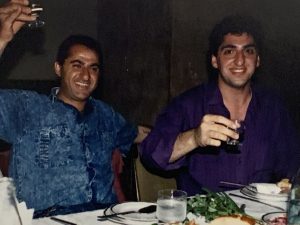 I made a new friend at dinner one evening at Hotel Armenia.

Thinking back, when Armenia emerged as an independent country, we fought to keep its people alive and the country from collapse or being invaded by one of its hostile neighbors.  Later, my work with The Paros Foundation allowed me to engage Armenia and her people directly through humanitarian and development work.  Now, thirty years later, I am kind of proud to report my Armenian is a bit better and so is Hayastan!  As we all stay at home this April 24th and commemorate the 105 anniversary of Turkey’s failure to exterminate our people, plan YOUR first or next trip to the homeland.  Figure out how you and your family can connect and make it a reality.  Be safe and go wash your hands.