FROM GARNI TO UNIVERSAL TO ABOVYAN | MY CONNECTION TO THE HOMELAND 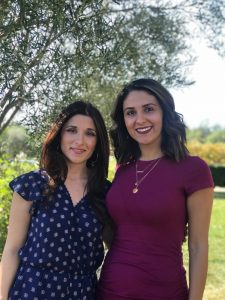 “I constantly thought about what I could do to actually make an impact for schools, particularly on the grade school level, in the areas of need outside the capital city of Yerevan.” -Seda Melkoni

My name is Seda Melkoni and I am on a quest to help make improvements to School #8 in the City of Abovyan. More than 530 children attend this school. The entire school needs to be renovated and I have decided to partner with The Paros Foundation on this project. Here is my story…

In 2014, I traveled to Armenia for the first time to work on an American television mini-series production that would be filming in various parts of Armenia. One of the production days took place at the historic Garni Temple during the very early morning hours before the gates had opened to the public. When we wrapped production and the public was allowed entrance, I noticed several small school field trip groups arriving and one group, in particular, came all the way to the gates and after some conversation I noticed them preparing to leave, only to find out that they were not aware that there was now an entrance fee to the site and since none of the students or teachers could afford to pay, they had to leave. I offered to pay for the class, they graciously accepted and the students were able to have their field trip. The teachers requested a photo with me and the class to put up at their school in appreciation of what I thought was a very, very small gesture for such gratitude.

I kept a copy of that photo and that experience stayed with me for several years as I constantly thought about what I could do to actually make an impact for schools, particularly on the grade school level, in the areas of need outside the capital city of Yerevan. 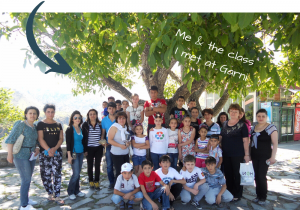 By 2017, I had my second daughter and was further motivated to create a way for them to be inspired and connected to their Armenian culture as well as understand the value of helping others. This was also the time I joined the production planning team at Universal Pictures Home Entertainment, where I met Tatevik Torossian. As we began to work together, I shared my experience in Armenia and learned that for years, Tatevik had been sending donations of school supplies to her childhood friend who was now a teacher at a school in great need of help in the city of Abovyan. Tatevik had also attended that same school as a child. This became the foundation of the project I had been thinking about for years. My husband and I established the ELSO Foundation, named after our daughters Elena & Sofia and began the process in seeking partners for our projects, beginning with me asking Tatevik to provide the introduction to her friend the teacher.

In the fall of 2018, I met with the staff of The Paros Foundation to discuss the Abovyan School project. Their team visited the school, assessed the leaking roofs, broken windows, struggling furnace and agreed to tackle this project. Paros listed the project on their website and we began raising the necessary funds to renovate the roofs over six of the school’s buildings. By spring of this year, we had enough funds raised to change the roof on one of the buildings. The Paros team efficiently and effectively replaced the entire roof of this first building. Moving forward, I plan to continue my appeal to my family and friends to help with the other five roofs needing repair. The students and staff are anxiously awaiting the repairs to solve the school’s many leaks. I feel fortunate that I connected that morning with students at Garni and through this effort, I hope to connect others to students and the staff at School #8 in Abovyan.

The town of Abovyan in Armenia’s Kotayk region is often referred to as the northern gateway to Yerevan because of its proximity to city (about 10 miles north.) Abovyan is home to more than 34,500 residents. More than 530 children attend School #8 in Abovyan. The school is in overall poor condition. School administrators do what they can to maintain the facility, but outside assistance is needed to dramatically improve conditions throughout this school. The roofs over the six buildings that are currently being used at the Abovyan School #8 are leaking and beyond repair. These roofs and much of the support structure beneath must be changed to help create a safe and comfortable environment for the children while they are at school. Learn more and get involved here.

WANT TO SERVE IN THE HOMELAND? APPLICATIONS FOR SERVICE ARMENIA 2020 AVAILABLE NOW