Yerevan, Armenia—Sixteen high-school students from The College Preparatory School in Oakland, California had the unique and exciting opportunity to meet with U.S. Ambassador to Armenia, John Heffern to discuss the mission of the U.S. Embassy in Armenia as part of their recent journey to Armenia. While at the Embassy, students also heard from several senior staff about careers in the U.S. Foreign Service.

In addition to being hosted at the U.S. Embassy, the delegation of 16 students and representatives from the School and The Paros Foundation visited the ROA Foreign Ministry and met with H.E. Amb. Vahe Gabrielyan, head of the Armenia’s Diplomatic Academy, and several historic and cultural sites throughout Armenia including riding on the aerial tramway to the magnificent Monastery of Tatev.

As part of their visit, the students from The College Preparatory School were introduced to several students from the Manana Youth Center, where they each had a unique opportunity to interact with one another as peers. During the visit, both groups of students participated in the ground breaking and clearing of the future site of “Ari’s Playground,” one of the Paros 100 for 100, Projects for Prosperity initiatives currently underway. Ari’s Playground is being built at the Yerevan Children’s Home in Nork, Armenia, which houses more than 80 children ages 0-6 years of age. Ari’s Playground is being named after Ari Spiglanin, who was adopted from the Yerevan Children’s Home more than 2 years ago by Lauren and Tom Spiglanin, who have taken the initiative to raise the funds necessary to complete this exciting project. For more information about Ari’s Playground visit www.paros-foundation.org/paros100/.

Formally launched in 2006, The Paros Foundation’s goal is to develop high-quality, high-integrity non-governmental organizations in Armenia by providing guidance and needed resources. This includes providing inspiring office space; free of charge, to three of the six organizations The Foundation works with in Armenia. To honor the centennial of the Armenian Genocide, The Paros Foundation launched The Paros 100 for 100, Projects for Prosperity program to implement 100 special projects, to help grow Armenia stronger and improve the lives of her people.

The College Preparatory School delegation was made possible through the support of The Paros Foundation.

From One of the Participants:

American Students Visit Armenia
On Tuesday April 3, 2012, 16 jet-lagged American teenagers and two faculty members arrived at Zvartnots Armenian International Airport. We planned to spend 11 days touring the beautiful and culturally rich country of Armenia. My fellow students and I attend The College Preparatory School in Oakland. Our group ranged in age from 14-18 years old and came from a wide range of ethnic backgrounds. Many students had yet to travel outside North America. The idea for the trip came from Roger Strauch, the founder of Paros Foundation. Peter Abajian, Paros’ Executive Director, organized the itinerary and logistics. Beginning in October, we students raised funds from food sales and school wide car washes. Eventually, we were ready for this unique opportunity and once in a lifetime experience. 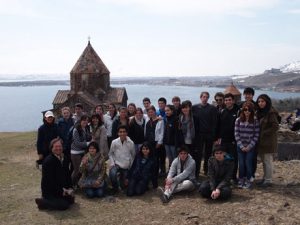 Our itinerary was packed with adventure. At the airport, we were met by the chief coordinator, Pete, our energetic tour guide, Marina, our good friend and trip assistant Harutoun, our nationally famous bus driver, Varek, and of course, Roger. We immediately set off for our “home” passing by a little Las Vegas, Drunken Bridge, the National Assembly grounds, and the president’s house.

On the first day, the group visited key tourist destinations in Yerevan. First thing in the morning, we climbed aboard our bus named “Cool Bus” and headed for Mother Armenia, an enormous statue at the top of the city visible from anywhere in Yerevan. At the same site, we saw the war memorial, which is dedicated to unidentified Armenian soldiers KIA during WW1 and the Azerbajian war. We then visited the modern art museum in the Cascade, which features famous art pieces connected with ancient Armenian history and awesome glass sculptures. Afterwards, we ate delicious chicken kebab sandwiches and made a quick visit to St. Gregory’s, Armenia’s largest church located in central Yerevan. The same day, we were honored to meet the United States Ambassador, the Honorable John Heffern, and his senior staff at the embassy itself. We visited and befriended the children of the Manana Youth Center, the leading organization in Armenia that provides kids with the technology and professional guidance for movie making and journalistic photography. We paired up with Manana high school students who were were English speaking. They showed us some of their brilliant, beautiful, and touching movies and the rooms where they filmed and edited many of these films. We all met for dinner later that night, and after warming up to our new friends, we all danced to traditional and classy live Armenian music in the center of the restaurant. It was incredibly fun. 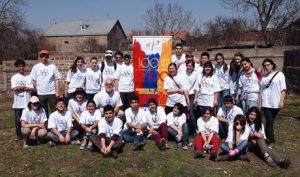 On Day 2, the combined student group of about 35 people visited Samosavank monastery, located on the edge of a 2,000 ft. deep canyon. There we learned about the geology of the area and the history of the Church. We of course also found time to have a huge snowball fight! That afternoon our large group worked on a service project to clear out the yard of an orphanage so that the Paros Foundation could begin construction of a wading pool and play area. That night, we invited the Manana kids to a homemade American lasagna dinner, and together we worked several hours to make an entertaining stop motion pixilation film.

The third day consisted of the Manana and Prep kids bussing to the ancient pagan temple at Garni. After Garni, we drove, while playing some pretty crazy Armenian kids games, to the monastery complex at Geghard and explored the seven different chapels built into the mountain. We then drove back to Yerevan and toured the National History Museum in Republic Square. At this museum, our proud and knowledgeable tour guide showed us ancient wheels, golden jewelry, the world’s oldest shoe, and enormous food cauldrons. On our way home via subway, innocent Charlie, a 6’8” Prep basketball player, thought he that he should take some pictures of the “Armenian Underground” to show to his family.  Alas, poor Charlie was arrested because the subway system is also a bomb shelter. Fellow Prep student Dina’s awesome Russian-speaking skills came to the rescue, and he was let out with only a warning.

On Day 4, the group perused the market of Vernissage where the Prep students purchased all sorts of fun merchandise including old Soviet military medals, a Soviet stopwatch and dysfunctional spyglasses, duduks, teeshirts, and bracelets. After that, we bussed to lunch at Lake Sevan and wound up the path to take pictures of the beautiful lake and landscape. On the path, we met a famous stone carver who was diligently working on his next piece while overlooking the spectacular scenery. We then traveled to the ancient city of Dilijan and watched some pottery being made. That night, barbeque dinner was at an enormous restaurant equipped with a jumpy house for kids, a dance floor and stage, a Las Vegas style fountain, and 1,400 of our best Armenian friends.

The next day was Easter. We were fortunate enough to attend Badarak at Holy Etchmiazin and then engage in a traditional egg cracking competition at the Armenian Cultural Center. Later the group was taken to the Genocide Memorial where we laid a wreath at the eternal flame, but unfortunately the 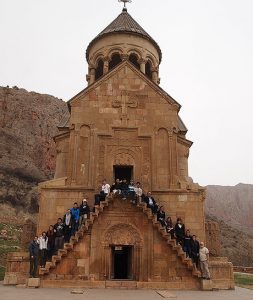 museum itself was closed. The next day, we climbed down St. Gregory’s pit at Khor Virap, and then drove many hours to Tatev Monastery. To reach the secluded fortress, we had to take the world’s longest sky tramway. We then explored the labyrinth of rooms dug into the mountain. That night, the group stayed in a hotel in the village of Goris and walked around in the hills looking for all the caves where the locals keep their cattle. The next morning, the group visited the Stonehenge of Armenia, Karahunge, and then we took the long winding road, through a canyon, to Noravank monastery. We had to climb a narrow, ancient staircase to access the sanctuary.

After an exhausting week of travel, we returned to Yerevan for our last full day in Armenia. We visited Grand Candy, the Foreign Ministry, 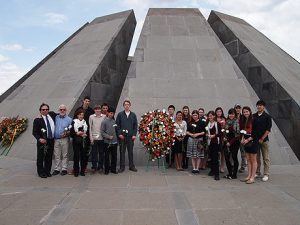 and then had a fantastic party with the Manana kids celebrating a successful trip. Besides being fun and a first class adventure, Armenia broadened all of our horizons, and many of the students have said that they want to return to Armenia with their families in the future.

MIA (AGE 5!) TEAMS UP WITH SHARE-A-PAIR AND THE PAROS 100 FOR 100 TO DELIVER WINTER BOOTS TO ARMENIA'S VULNERABLE CHILDREN