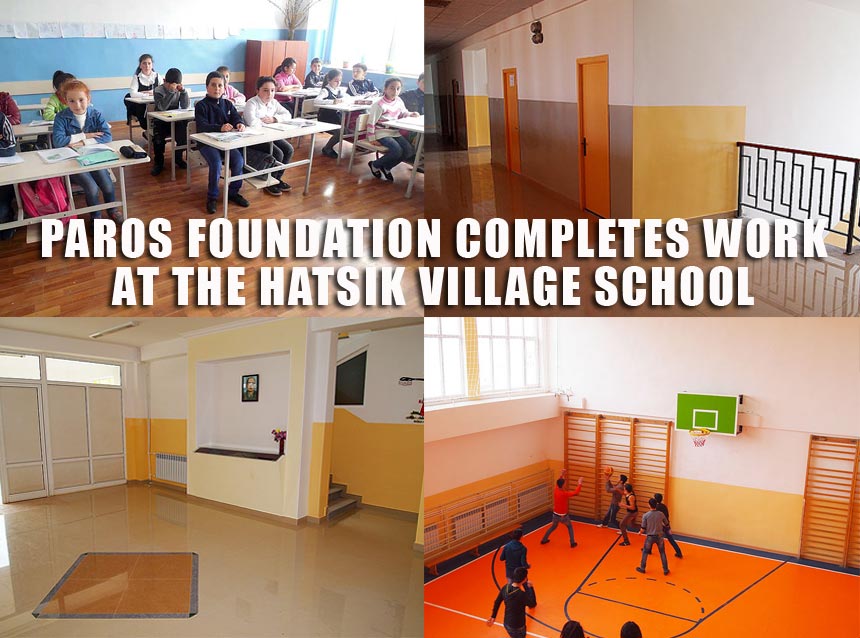 Armavir Region, Armenia–The Paros Foundation is pleased to announce that the Hatsik village school renovation project is now successfully complete, thanks to the addition of a renovated gymnasium and more classrooms by the Paros SERVICE Armenia 2015 volunteers. The entire renovation occurred over the course of three summers with the support of scores of SERVICE Armenia youth and almost $85,000 in donations. The school received a total of 12 new classrooms, three bathrooms, boys and girls locker rooms, renovated entry and hallways, and the new gymnasium.

“The village of Hatsik was an important SERVICE Armenia site for our volunteers,” said Peter Abajian, Executive Director of The Paros Foundation. “Generous donors supported this project, and our volunteers and professional staff worked to significantly improve the physical learning environment for students.”

This renovation was a true cooperative effort. Throughout the process, village children joined in the work. The Hatsik municipality and school administration continued to support the building efforts by contributing both human and financial resources. Children of Armenia Fund undertook the complete renovation of the second adjacent building on the school’s campus. The Paros Foundation underwrote all administrative expenses allowing 100% of donor contributions to go directly to this project.

As part of The Paros Foundation’s work in the village of Hatsik, several other smaller projects were implemented including the provision of eye examinations for students, the distribution of dental hygiene products, the donation of a new EKG machine to the local medical center, and the distributing shoes as part of the Share-a-Pair project. Plans are underway for the construction of a soccer field that would host youth and club soccer teams.

“Our SERVICE Armenia participants worked hard, learned new skills, and accomplished their goals. Working together on the various projects in the village of Hatsik was an enriching experience for all of us,” said Narine Panosian, Associate Director of The Paros Foundation. “Over the last three years, a real bond was formed between the villagers and our team of volunteers.”

The Paros Foundation established SERVICE Armenia to provide young people between the ages of 17 and 23 the opportunity to engage in meaningful service work while having fun in Armenia. Participants spent one month working on a variety of humanitarian projects and touring Armenia and Artsakh, all while developing life long friendships and having fun. Applications for this summer’s program, which will operate from June 23 to July 24, 2016 are currently available at www.parosfoundation.org.

The Paros Foundation would like to express its appreciation to the individuals and organizations that contributed to the work in the village of Hatsik. For a complete listing, please visit www.parosfoundation.org.

About The Paros Foundation

Donations to The Paros Foundation, a 501(c) 3 organization, are tax-deductible to the fullest extent allowed by law.  The Foundation underwrites 100% of administrative costs allowing all donor contributions to be allocated directly to the projects.

NEW HOMES AND A FRESH START FOR GYUMRI FAMILIES