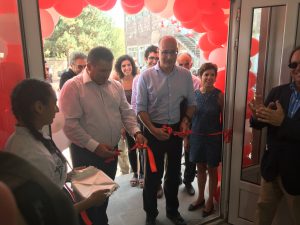 Jean-Marie Atamian flanked by his family at the ribbon cutting ceremony for the first and second buildings on the school campus that were renovated in the fall of 2017.

New York, NY–Jean-Marie & Lori Atamian recently announced their sixth major gift of $100,000 to The Paros Foundation’s Prosperity on the Border Initiative.  This contribution will be used to rebuild a large two-story school building in the village of Nerkin Karmir Aghbyur (population 1,380) (“NKA”).  NKA was the most heavily shelled village on the Tavush border during the war for the liberation of Artsakh.  This third and final wing of the secondary school will house a new science classroom and laboratory, an exercise and dance studio, a home economics classroom, a wood and metal shop, a library, additional offices and classrooms and new bathrooms.

“The Atamian’s leadership on our Prosperity on the Border Initiative has helped us make more than $1 million worth of needed infrastructure economic development programs in these vital border communities,” said Peter Abajian, Executive Director of the Paros Foundation.

This investment is the latest infrastructure project underwritten by the Atamians in NKA.  Specifically, since 2013, the Atamians have financed the reconstruction of the village’s medical center, kindergarten, secondary school (3 large two-story buildings), emergency services building and water pipeline.  The Atamians have also awarded over 20 individual family agricultural and home renovation grants to improve the standard of living of numerous households.  The impressive economic progress of NKA has prompted the Atamians to make additional long-term commitments to ensure the village’s continued growth and prosperity for future generations.

Based on the success of this model village, and the generous support of our expanding base of donors, The Paros Foundation is replicating this strategic approach to rural development by undertaking these types of life changing projects in eight additional villages along the Armenia-Azerbaijan border in Armenia’s Tavush Region.

Construction at the school in NKA was launched last week with the goal of completing work on one of the two stories prior to the start of the new school year in September.

Paros Foundation launched its Prosperity on the Border initiative in 2015.  It is currently working in 11 villages throughout the Tavush region, but primarily in communities along the Armenia-Azeri border.  Thanks to the generous support of Paros Founder and Chairman, Roger Strauch, underwrites all administrative expenses, allowing100% of donor contributions are allocated in their entirety to the projects. To support this and other projects of The Paros Foundation, please visit www.parosfoundation.org.