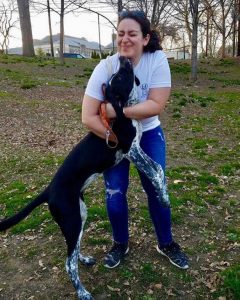 Sarah Derderian enjoying the afternoon with one of her four legged friends.

Almost three years ago I made the move from Philadelphia, PA to Gyumri, Armenia to work at the Debi Arach Children’s Center. What I expected to be a one-year assignment has evolved into a longer-term, life changing adventure. Since the day I arrived, I have been asked the same question repeatedly from everybody I meet (whether they are from Armenia or elsewhere.) “Why Armenia? Why Gyumri?”. The “Why Armenia?” question is very simple to answer.  I am one of many repatriates who were born outside of our motherland, but decided to move back. “Why Gyumri?” is the question that I struggle putting its answer into words.

Today, Gyumri is commemorating the 30th anniversary of the Spitak earthquake; the earthquake that took the lives, homes, jobs, and futures of so many people. Now, 30 years later, many locals say that not much has changed. Sure, there are new buildings, new businesses, new places to go, but an uneasyness arises any time the topic of the earthquake is mentioned. A city that was once the cultural capital of Armenia, which prospered under the Soviet Union, the home of some of Armenia’s most famous comedians, playwrights, and artists,  is now a place  where many people struggle daily to survive. Three generations of people continue to live in what seems to be a never-ending cycle of poverty.

Gyumri is not an easy place to live. On the contrary, it’s very difficult to live in a community riddled in poverty and in many aspects stuck in a Soviet mentality. But, what gets me through is my work at Debi Arach and the hope that the investment we make in this next generation will be a solid step in moving Gyumri forward. I currently work with an amazing group of children who are the next generation of Armenia’s doctors, politicians, programmers, and leaders.

I guess I’m here to say that there is hope in Gyumri, and that’s “Why Gyumri.”

Sarah Derderian works as development officer and special projects director at the Debi Arach Children’s Center in Gyumri.  Sarah has also founded the D.O.G.-Dogs of Gyumri project, which works to spray and neuter street dogs and arrange for adoptions of puppies.  Be sure to visit Sarah, Debi Arach and D.O.G when you are in Armenia.