In 1974, the Vanadzor Museum of Fine Arts was founded as a branch of the National Gallery of Armenia. In 1979, it was reorganized and received the status of an independent Museum of Fine Arts with its own collection. Soon thereafter, the Museum became one of the most prominent cultural centers in the Lori region.

The Museum houses more than 1,700 works of art including paintings, sculptures, drawings, prints and decorative arts. The first floor exhibit hall is dedicated to sculpture and drawing. Works by artists of Lori Region are on display in a separate hall. Special exhibitions are regularly held.

The Museum’s research team works in the fields of history, criticism and theory of art, as well as delivers public lectures, and conducts collaborative meetings and seminars. Students from schools, colleges and universities have the opportunity to hold and attend classes in the Museum.

Though the Museum receives modest state support, the Museum relies on support from private individuals and foundations to grow its impact as an important destination in the Lori Region. The Paros Foundation supports the Museum with aggressive marketing efforts designed to raise awareness of the Museum and its significant collection of art in an attempt to help redevelop and reinvigorate the historical art colony in the Lori Region.

In 2009, the Paros Foundation created a market for art work and crafts, and a source of revenue for local artists and the Museum through the construction of a Museum Gift Shop at the Vanadzor Museum. All proceeds from this shop benefit the artists and the Museum itself, and was built in memory of Angela and Karekin Barsoumian (Allepo, Los Angeles).

To learn more about the Vanadzor Museum of Fine Arts please visit their website at www.vanart.org 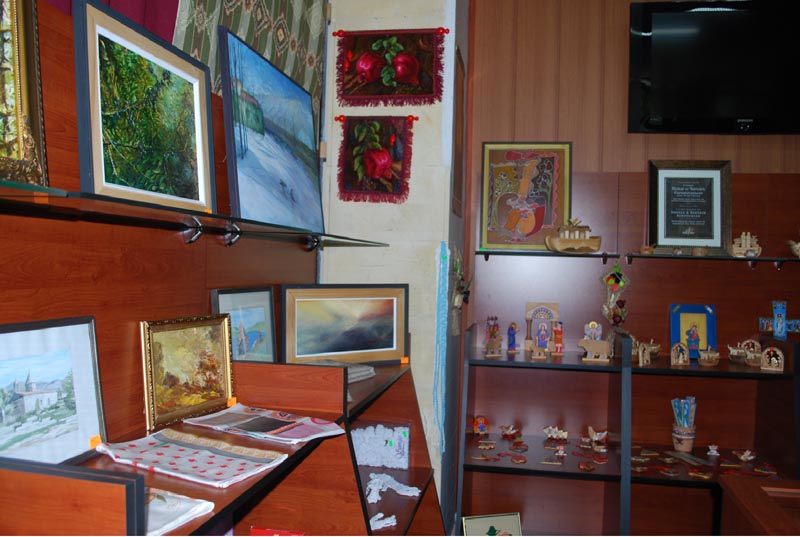 The gift shop at the Vanadzor Museum built in memory of Angela and Karekin Barsoumian (Allepo, Los Angeles).

The Vanadzor Museum of Fine Arts is dedicated to increasing the knowledge and appreciation of art through its collection, exhibits and educational resources.

Your donation to sponsor the Vanadzor Museum of Fine Arts will be recognized on all relevant press, The Paros Foundation and the museum’s websites. A tour of the museum can be arranged for sponsors visiting Armenia.