Nerkin Karmir Aghbyur (NKA) is a village with 1,380 residents in the Bert area of Armenia’s Tavush Region. This community lives on the border with Azerbaijan under the risk of sniper fire and renewed armed conflict. The kindergarten currently can serve only 25 village children due to its physical condition and the fact that part of the building and playground is exposed to Azerbaijan. The kindergarten is housed in a building that also contains the newly renovated village medical center (a completed Paros 100 for 100 Project) and the village administrative office.

The kindergarten consists of two floors and totals approximately 4,600 square feet. The first floor is the kitchen, bathroom and playroom. The second floor is currently not in use because of its condition and the fact that four windows face Azerbaijan and are within sniper range. As recent as May of 2013 this building was hit with sniper fire. Four windows on the second floor would be blocked shut. The second floor would ultimately house the kindergarten’s storage room, principle’s office, a room to allow the children to nap during the day, and a classroom. The kindergarten needs a new roof over its portion of the building, new windows and doors and a heating system. Its current bathroom and staircase needs to be redone. The facility would also be completely painted and have new flooring and carpet installed. The floor support structure beneath the first floor also needs to be repaired to support the existing flooring, as there are some minor structural issues that must be corrected.

Any partial funds received for this project will be first used to replace the damaged roof. Then funds will be allocated to replace the windows and secure the building and playground from exposure to Azeri sniper fire and ultimately complete the needed interior renovations. The Paros Foundation team will work with the village administration to ensure that they support the project in as many ways as possible including donated materials, free labor and/or support services.
It is anticipated that the repairs to the kindergarten will take approximately three months depending on weather conditions. 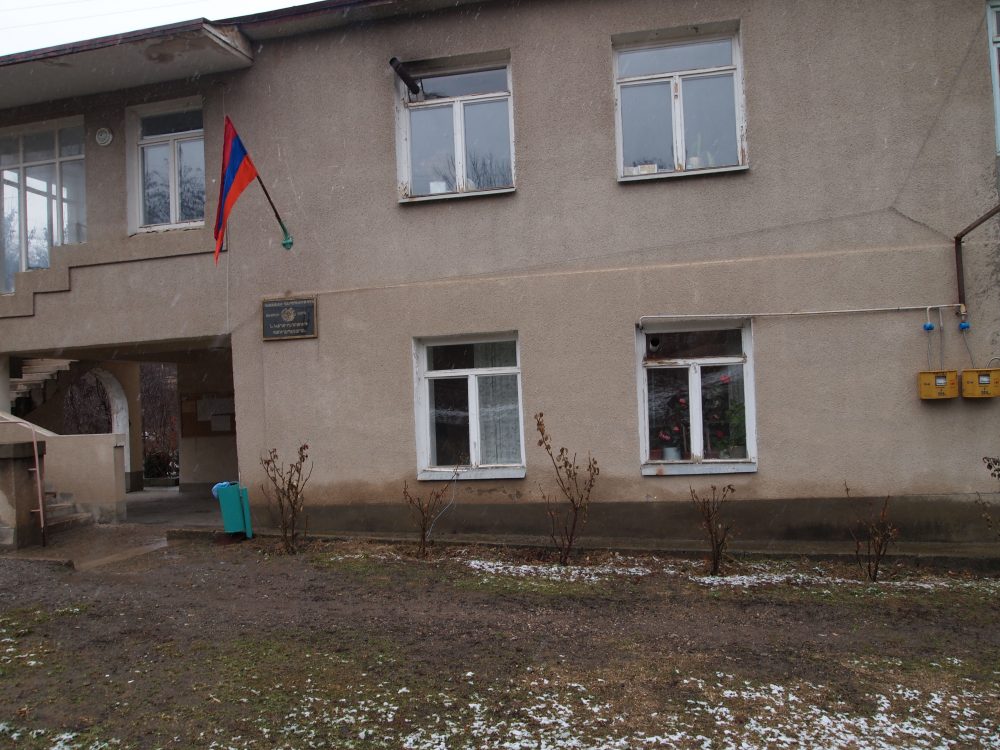 The Nerkin Karmir Aghbyur kindergarten and playground is exposed to Azerbaijan. 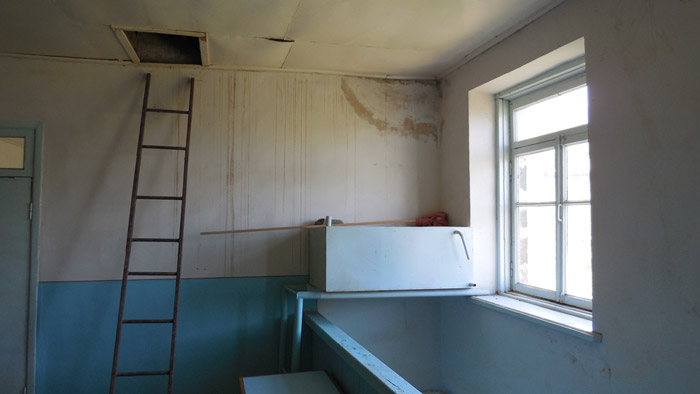 The kindergarten building has several leaks in the wall, crooked floors, unsafe and unstable stairs and is in need of a complete renovation. 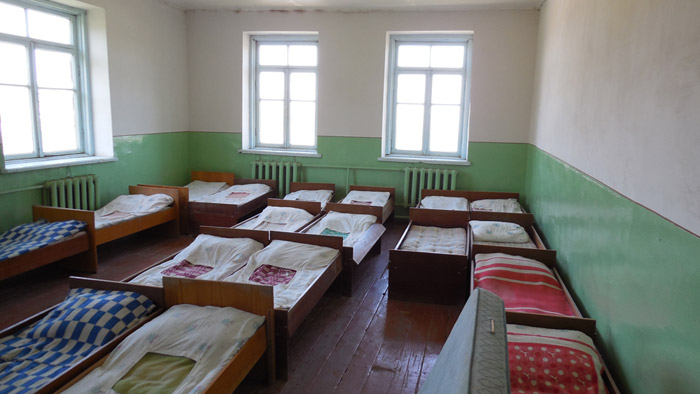 The room in which the children take naps has windows directly facing Azerbaijan and is vulnerable to sniper fire. 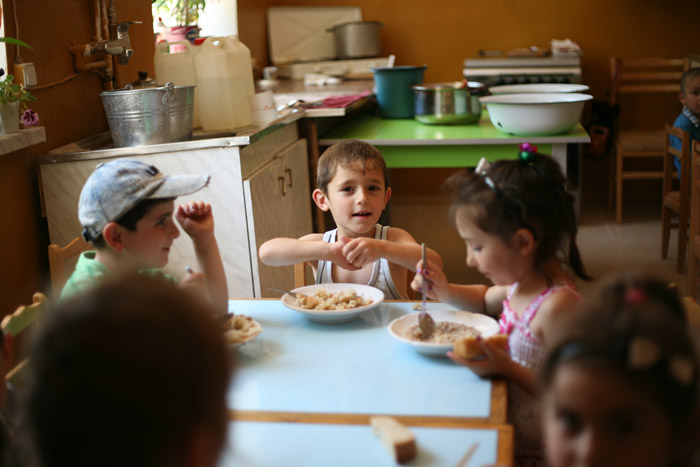 Children at the Nerkin Karmir Aghbyur kindergarten having lunch. 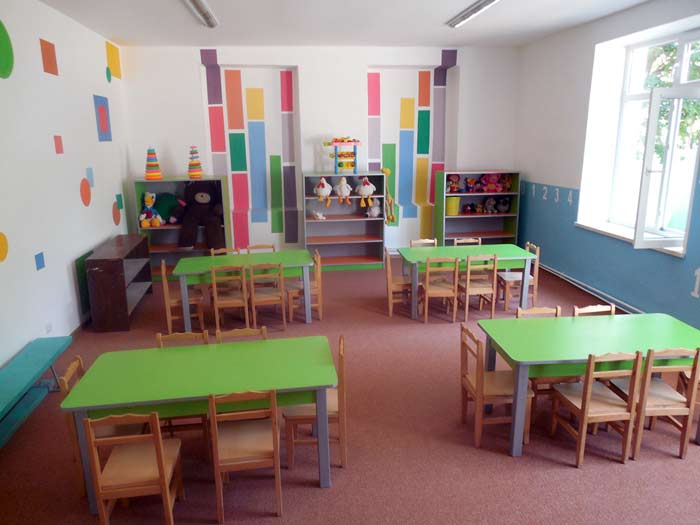 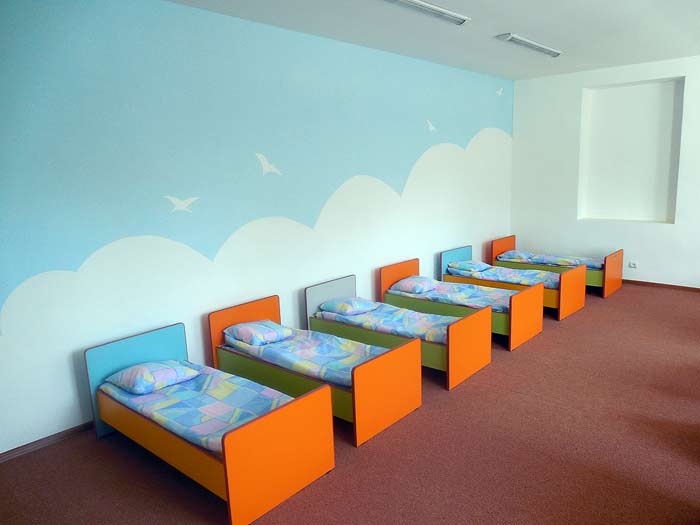 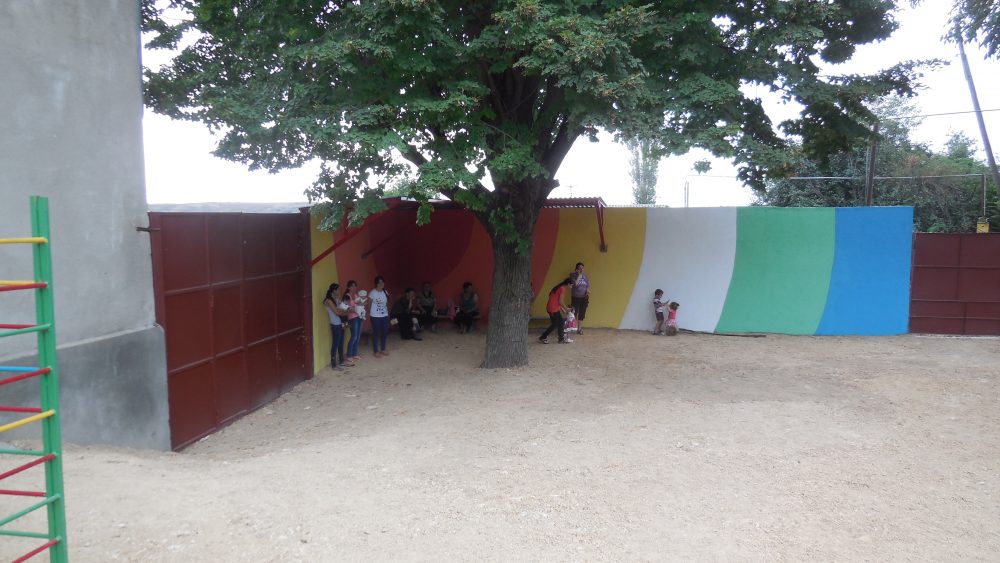 Kindergarten education is important for all children. The children in the village of Nerkin Karmir Aghpyur are limited in their opportunities because many more children would like to attend kindergarten then the current facility allows. In addition, villagers living in this isolated border village are under the constant threat of enemy fire and renewed armed conflict. A normal functioning kindergarten that is safe and can facilitate the resident’s needs is important for this community.

The renovation of the kindergarten will immediately better facilitate the educational needs of the residents in this village. Materials will be purchased locally when possible, thus providing a boost to the local economy. Several local workers will be hired during the renovation process and thus provide these residents short-term employment.

In order for a community to thrive, its residents must have access to an adequate, clean and safe kindergarten. This renovation will impact the lives of all of the residents of the village of Nerkin Karmir Aghpyur and their children.

A local construction crew was hired and has begun work on the kindergarten in NKA. The supplies have all arrived safely.

Per the request of the mayor of the village, the decision was made to reconfigure the rooms and windows in order to optimize safety and protect the children from Azeri sniper fire. The local construction crew blocked off several windows on the second floor with tufa stone, and created smaller windows elsewhere, to let in light.

The local crew is working on the roof, which was damaged from leaks as well as Azeri snipers. The roof will be replaced with corrugated metal roofing. The crew also began work on the interior of the kindergarten including the floors, walls, basement and electrical work.

Construction has begun on a security wall that will block the playground and the entrance of the kindergarten. This will become the first ever security wall built in Armenia.

Work in the interior of the kindergarten is moving along nicely. New doors, and the remaining windows have been installed and work on the new staircase is also progressing. The restroom will also be fully renovated.

The art teacher at the local school was hired to design and paint welcoming and child-friendly images for the kindergarten.

After months of hard work, the renovations at the kindergarten have been completed and the village awaits the opening celebrations.

Today Azeri snipers shot toward she kindergarten and damaged the roof and walls of the building, as well as a villager's car. Thankfully none of the village residents were hurt. A small crew will work throughout the weekend in order to quickly make the necessary repairs.

The ribbon cutting and school opening celebrations was very successful. Families attended with their children and were looking forward to sending their children to the new, warm and most importantly safe kindergarten.