Emma A. and her son live in the border village of  Nerkin Karmir Aghbyur.  On the morning of July 12, the Azeri’s launched a cross border attack on the Berd area of Armenia’s Tavush Region utilizing attack drones, tanks and other heavy artillery.  Although the Azeris ultimately lost control of strategic military posts to the Armenian defense forces, a considerable amount of damage was inflicted upon the villages of Nerkin Karmir Aghbyur, Aygepar, Movses and Chinari.

In response to this assault, The Paros Foundation immediately committed to improving these villagers’ homes well beyond the damage sustained during this recent shelling. Work has already started in rebuilding Emma’s home, thanks to the on-going generosity and sponsorship of Jean-Marie Atamian and his family, who have adopted this important border village and made major investments in its infrastructure since 2012. In the words of Mr. Atamian: ” No one should underestimate our resolve standing with our villages; for every house the enemy destroys, we will built 10 new homes.” Other residential projects in the neighboring border village of Aygepar, along with immediate reconstruction of its kindergarten, will be addressed with funds raised from the Emergency Reconstruction Fund.

A large caliber mortar landed a few feet from Emma’s home.  Its explosion left a crater in her yard, destroyed her garden including several fruit trees, and structurally damaged her home.  The reconstruction of her home will include rebuilding the support structure for her home and balcony, replacing the roof and windows, running a proper heating system throughout the home, building a new bathroom (replacing the family’s outhouse) and completing a full interior renovation.

Nerkin Karmir Aghbyur is an important border village with a population of approximately 1,100 residents in the Berd area of Armenia’s Tavush Region. This community remains under constant risk of sniper fire and renewed armed conflict. NKA was the single most damaged Armenian village during the Azeri conflict in the 1990’s. The economy of the village and the livelihood of many of its residents have suffered due to these difficult and dangerous conditions. In particular, 70% of their fertile land is unusable because of frequent sniper attacks. Nerkin Karmir Aghbyur is a beneficiary village of the Paros Foundation’s Prosperity on the Border Initiative. With major financial support of Jean-Marie Atamian and his family over the last eight years, much of the village’s infrastructure has been completely rebuilt and improved including, but not limited to, its large secondary school, expanded kindergarten, medical center, emergency services building and water distribution system. In addition, several families have benefited from agribusiness and animal husbandry projects. Having funded the rebuilding of NKA’s infrastructure, the Atamian family is now focusing its attention on the reconstruction of severely damaged houses to provide decent and safe homes for deserving families in the village. In the last year alone, three houses were rebuilt, and two additional homes are currently under construction now. 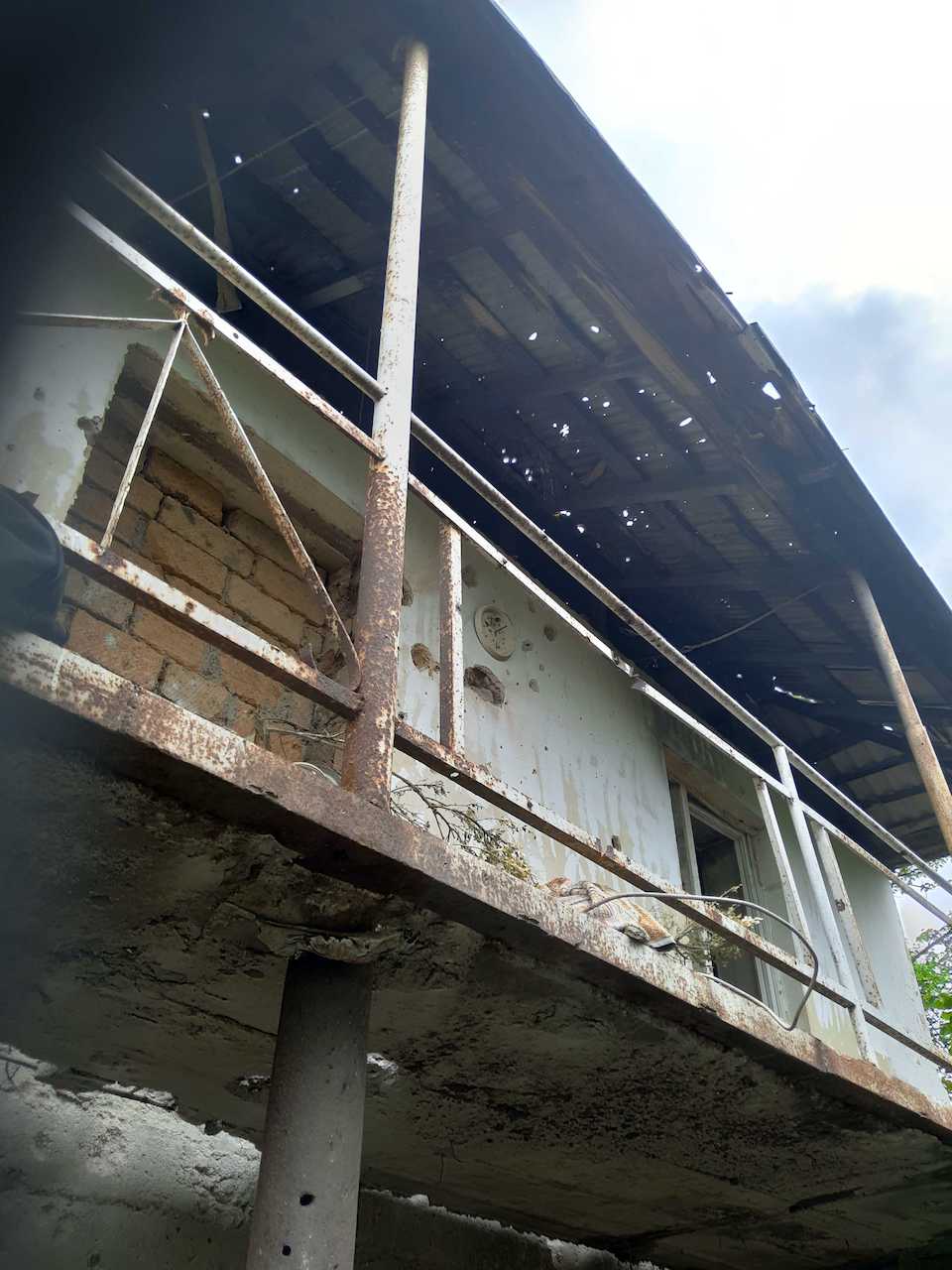 Emma A. and her son's home was severely damaged by a mortar that landed a few feet from her home. 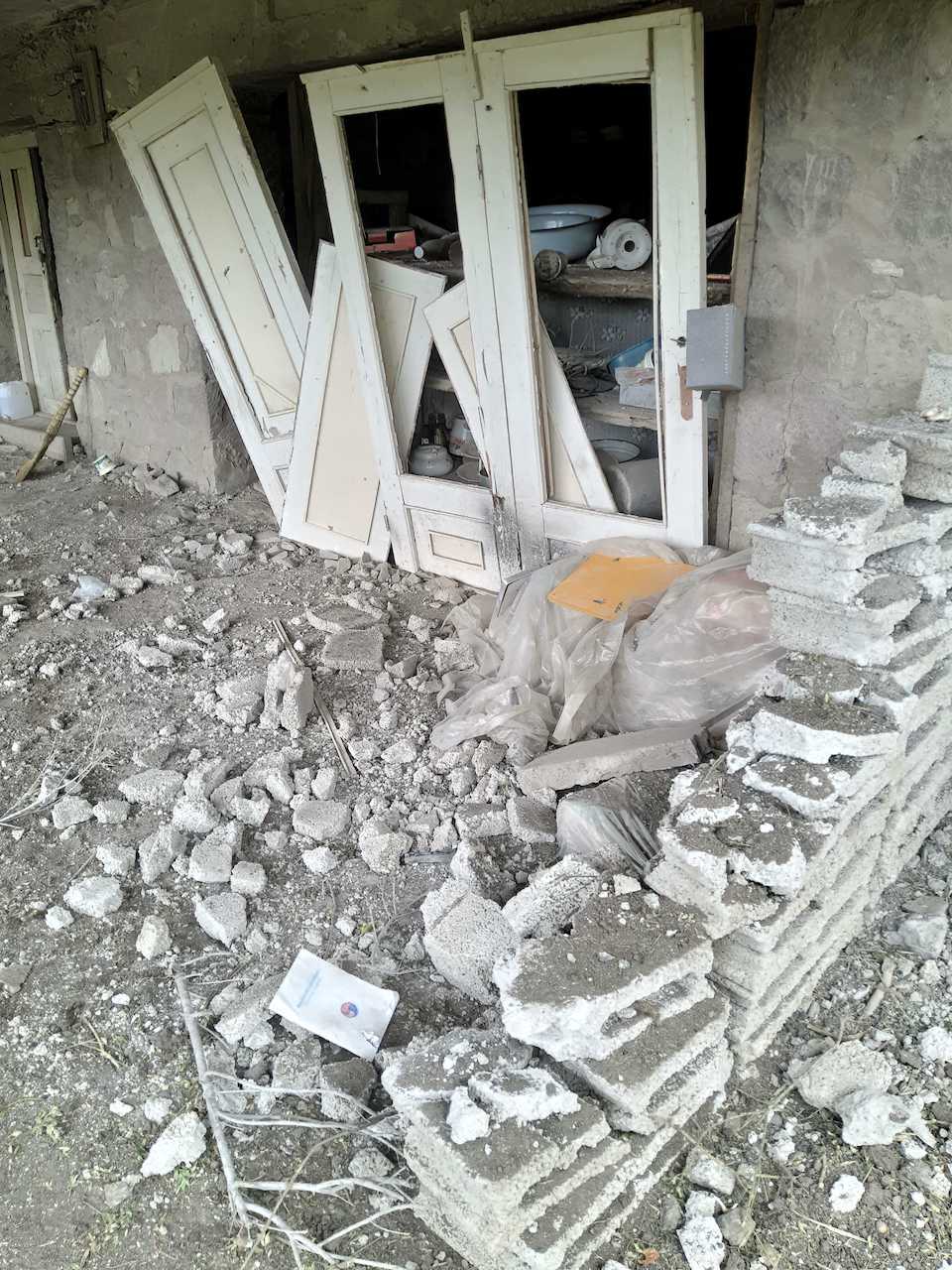 Structural damage to Emma's home needs to be corrected as the first step in her complete home reconstruction. 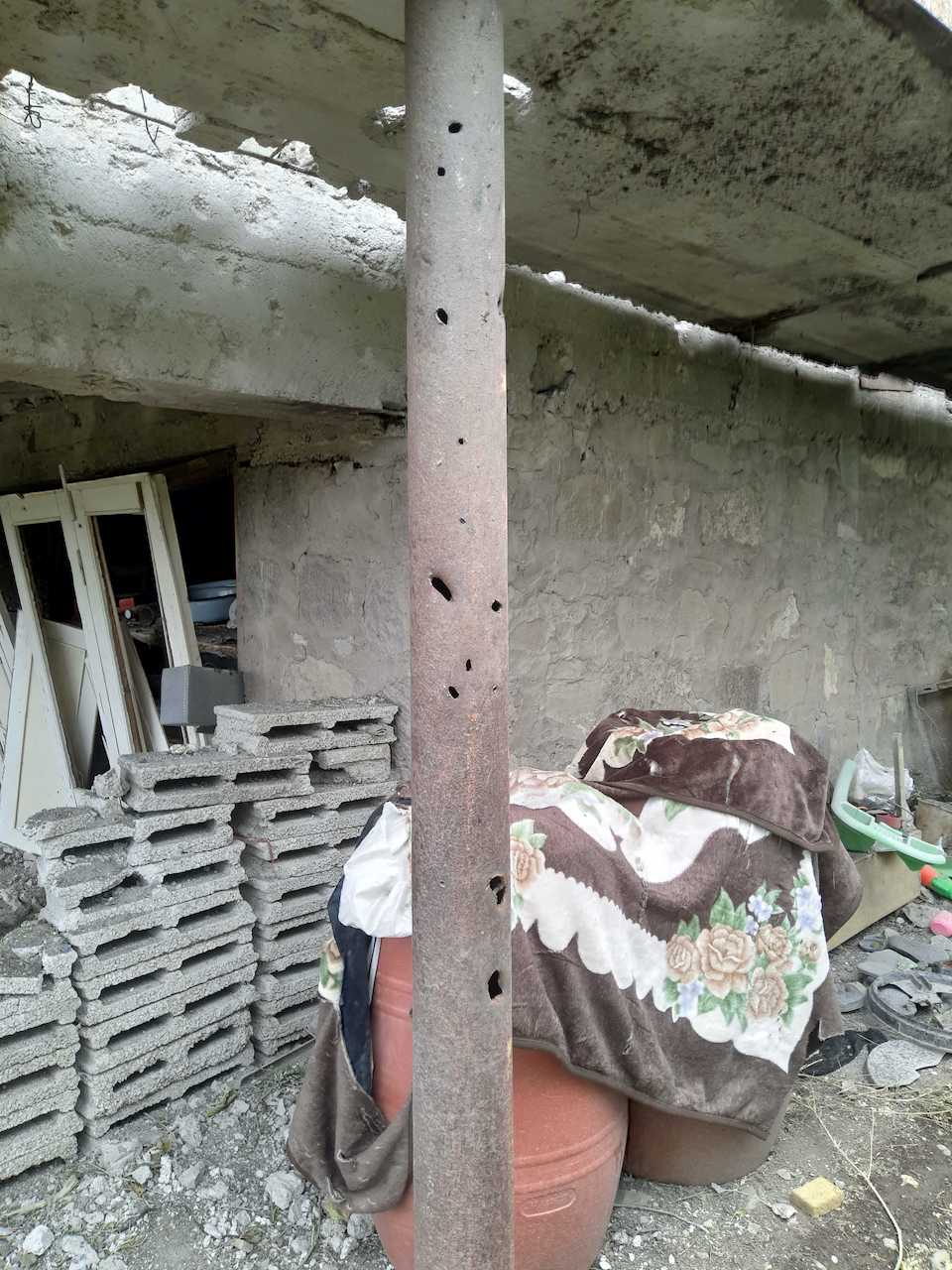 Scraptnal from an Azeri mortar, and the pressure from the explosion, has partially collapsed the balcony and support beams from her home. 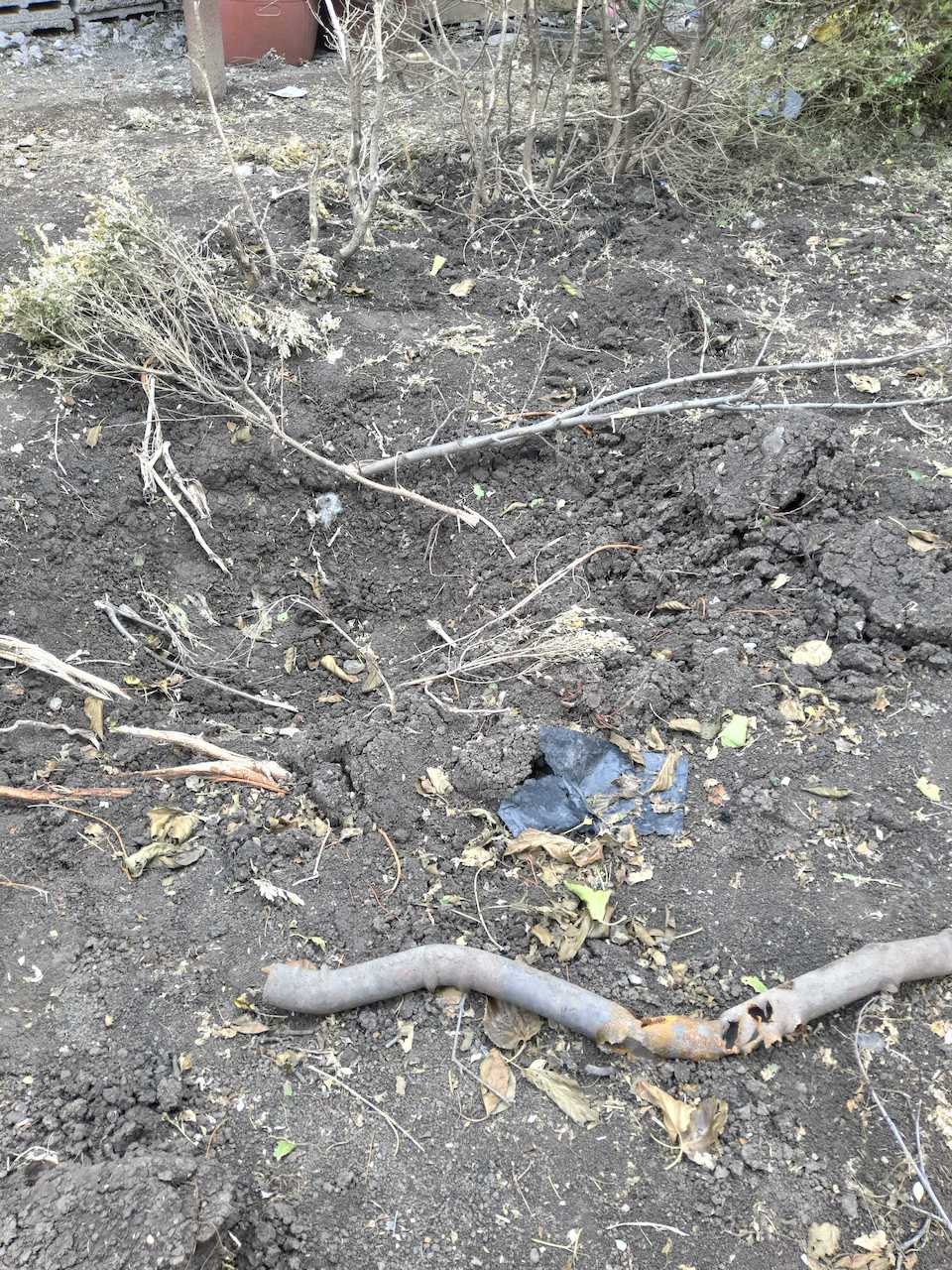 An Azeri mortar struct a few feet from Emma A's home, which seriously damaged her home and garden. 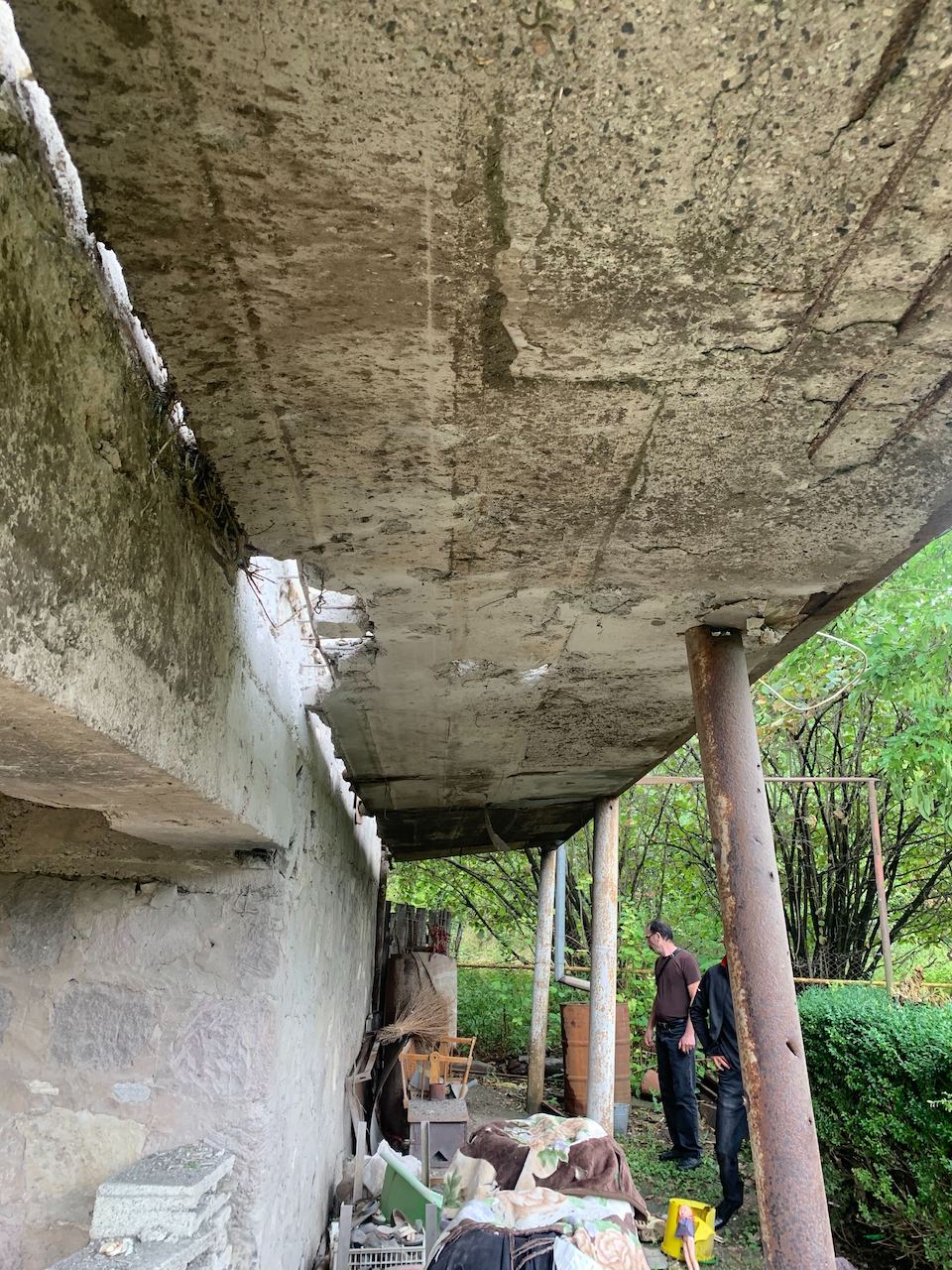 The Paros Foundation team quickly arrived on site and assessed the damage caused to Emma's home by Azerbaijan's attack.

A large caliber Azeri mortar landed a few feet from Emma’s home. Its explosion left a crater in her yard, destroyed her garden including several fruit trees, and left her home with serious structural damage.

In the short term, Emma’s home will be completely reconstructed giving her and her son (and his future family) a fresh start. The reconstruction of this home will benefit the local economy and a minimum of four workers will work on this home.

In the long term, the benefit of repairing homes damaged by the conflict is significant from both the village standpoint and a mental standpoint.

Work to rebuild Emma and her son Vartan's home is moving along well. Emma is happy with the progress being made. When Vartan is not serving as a soldier guarding the border near his home in Nerkin Karmir Aghbyur, he lends his support to the crew working to rebuild.

Because of the attack in Artsakh by Azerbaijan, the village is on high alert and work has stopped on Emma's home. Her son, Vartan, is at his border post.

The crew is back to work and working to complete the work on the exterior of Emma's home prior to winter. With the new heating system installed, work will continue inside as the work outside is completed.