De-mining in Nor Karmiravan Village

Since 2000, The HALO Trust has cleared nearly 500 minefields in Nagorno Karabakh and is the only humanitarian mine clearance operator here. Our mission is to lead the effort to protect lives and restore livelihoods threatened by landmines and the debris of war.

The intensive fighting during the 1992-94 war between Armenia and Azerbaijan over Nagorno Karabakh resulted in the laying of hundreds of minefields and large amounts of explosive remnants of war littering the region. Twenty-six years have passed since the end of the war, and local communities still suffer the enduring presence of landmines and other explosive remnants. With one of the highest annual per capita accident rates in the world, with 1 in every 382 Karabakhis being killed or injured from a landmine or other explosive since the end of the war, Karabakhi communities fear for their lives and the safety of their children.

Aside from the immediate risks landmines present to life and limb, they also directly affect the socioeconomic well-being of communities of Karabakh, who are among the poorest in the region with 21.6% of the population living below the national poverty line of $2.40 per day. The majority of impoverished people in Karabakh live in rural areas, where people disproportionately rely on subsistence farming, foraging, and the use of natural resources for survival. Their struggle to support themselves and their families is compounded by the presence of explosive remnants of war, which make accessing and using their land impossible. A study conducted by the University of Southern California on the socioeconomic impact of mines on communities in Karabakh found that, on average, the presence of landmines cause a 45% decrease in the income of rural households. This information is further supported by HALO’s internal evaluation of post-clearance land use, which shows that the household income of rural communities increased by nearly 40% through the use of cleared ground for agricultural purposes.

In partnership with The Paros Foundation, The HALO Trust proposes to mobilize and deploy an eight-person manual de-mining team to clear a minefield in Nor Karmiravan village. Nor Karmiravan has a population of 195 people, or 56 households, and is a remote village in the Martakert region, which is the most heavily mine-impacted region in Karabakh and a priority for HALO. Around Nor Karmiravan, HALO has already cleared 19 minefields with 190 acres (770,773 square meters) of land—the size of 144 football fields—and has found and safely destroyed a total of 138 landmines and 159 items of unexploded ordnance, including cluster munitions.

However, there are still mined areas remaining that must be cleared. One major priority is a piece of land located close to a regularly used road. This minefield (labeled M-200) is contaminated with anti-personnel and anti-vehicle mines. An anti-personnel mine is designed to maim adults, but is powerful enough to kill a child; an anti-vehicle mine can destroy a tractor and kill its operator, or kill or injure a whole family if driven over by a car.

The estimated contaminated area of M-200 is 14,318 square meters. The clearance of this minefield will ensure the safety of local villagers who will cultivate the cleared land, as well as that of all Karabakhis using the nearby road.

HALO is need of $23,000 USD, to be matched fully by an anonymous donor for a total project budget of $46,000 USD. The primary expenses relating to this project will be salaries for eight Karabakhi Armenian staff members working full-time for a period of six months.

Six months from start date
De-mining in Nor Karmiravan Village
$125 of $23,000 raised 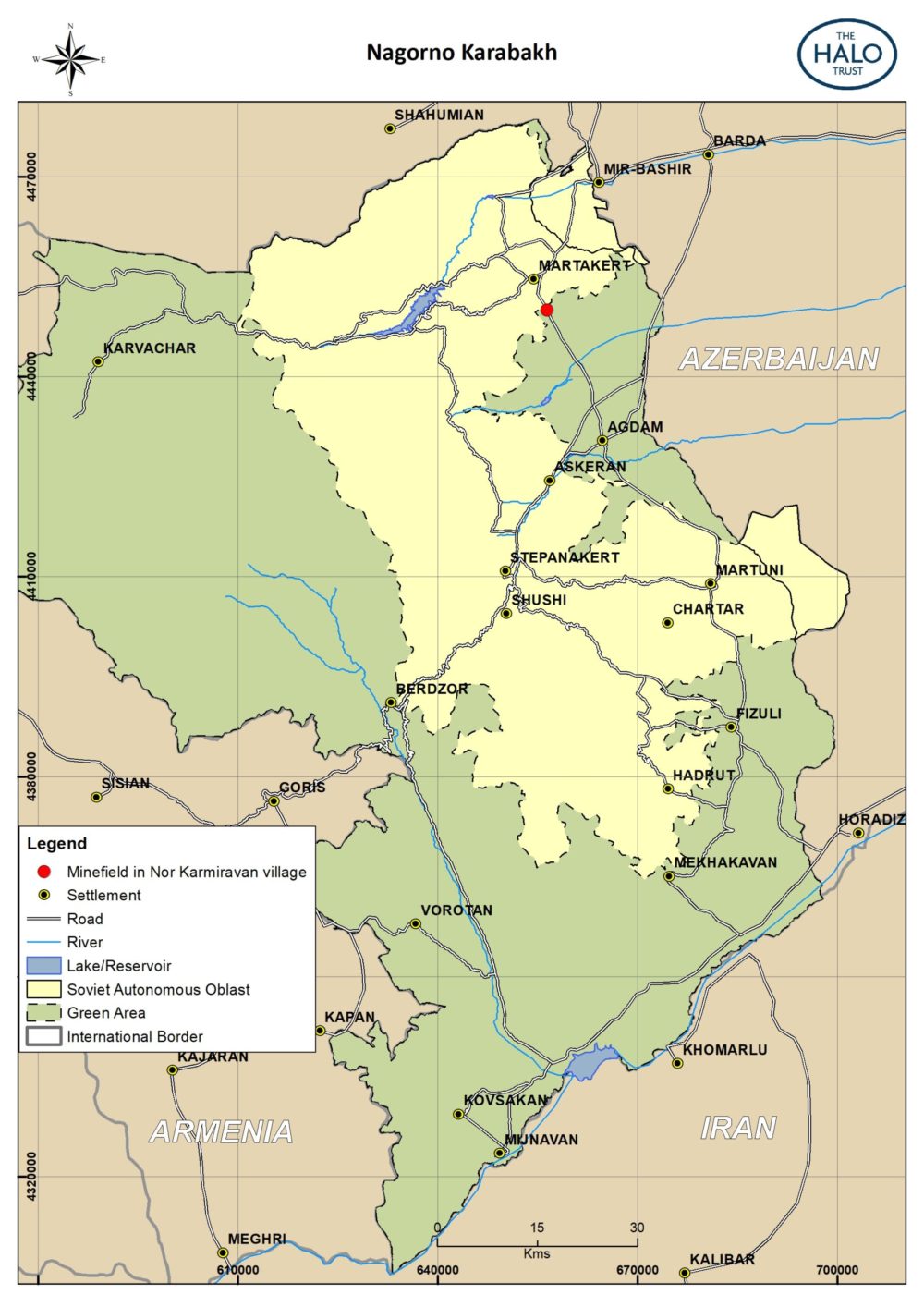 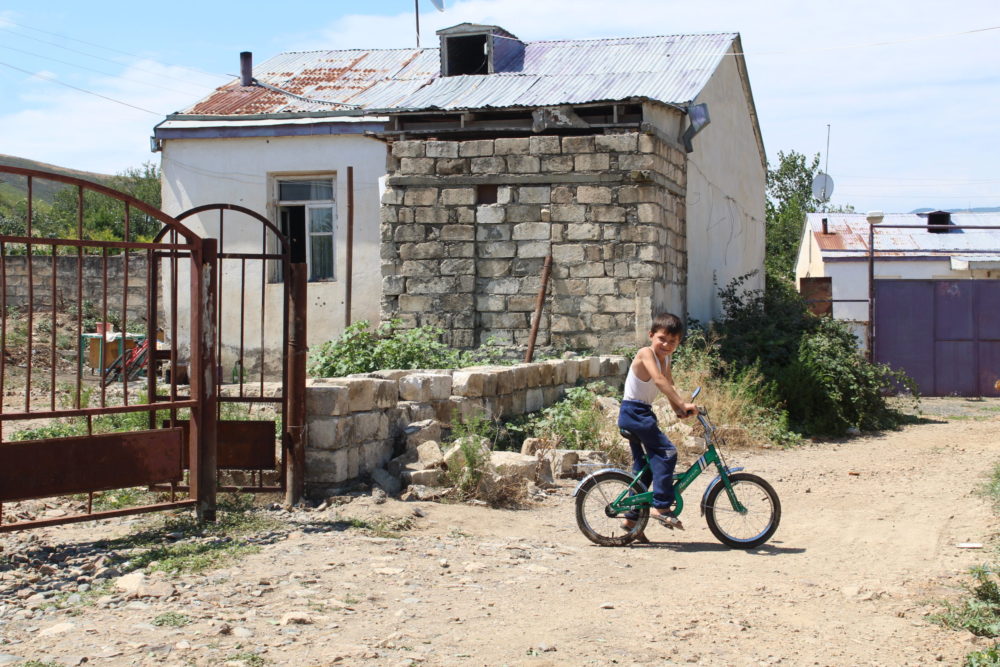 Clearance of this minefield will ensure the safety of local villagers. 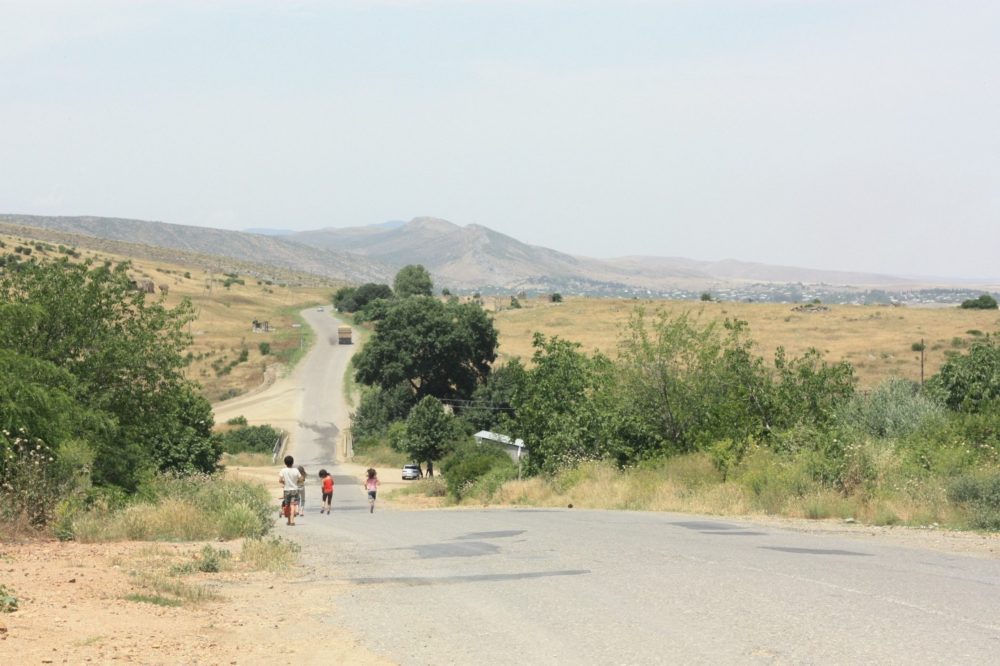 The village of Nor Karmiravan.

Securing funding for any form of humanitarian aid in Karabakh is always a challenge. Its disputed status makes it difficult to receive international government aid. The only government partner in recent years has been the U.S. government, which limits the use of its funds to areas of Karabakh that fall under the Soviet-era boundaries of the Nagorno Karabakh Oblast (“Traditional Nagorno Karabakh”). As a result, the people residing outside of Traditional Nagorno Karabakh (HALO uses the term “Green Areas” to describe these areas) are left isolated and vulnerable to the threat of landmines. HALO is the only international non-governmental organization providing any form of support in the Green Areas. In order to clear minefields in the Green Areas, HALO is reliant on support from private donors. The minefield in Nor Karmiravan falls outside Traditional Nagorno Karabakh and, therefore, HALO cannot conduct clearance there using funds from government donors. Furthermore, as of April 2020, the U.S. funding has ended, and future funding is still uncertain. HALO is looking forward to partner with The Paros Foundation and its supporters to clear the minefield in Nor Karmiravan.

In the short term, minefield M-200 in the village of Nor Karmiravan will be mine free six months after the start of de-mining.

Clearing minefield M-200 in the village of Nor Karmiravan will eliminate the risk of death or injury and allow for close to 195 people to live and raise their children safe from the harm of landmines and to open up access for farmers to work, to take their crops to market, and lift themselves from poverty; and to help with safe access when they seek medical care and education for their families.

HALO will be producing co-branded and co-logo materials as part of this project which can be jointly shared in communication channels by HALO Trust and The Paros Foundation. Stories and recognition of such partnership will be featured in HALO’s and Paros Foundation’s social media channels and newsletter and on our website. Following clearance of the minefield, HALO staff will organize a ceremony with local leaders in order to return the cleared land back to the community and will place a board near the minefield marking The Paros Foundation’s support for the clearance, with the Paros logo. HALO would like to invite Paros Foundation staff members and key donors to visit the site of the project while clearance is happening and to also meet local people who will use the cleared land.